Probably the oldest disease known to mankind, leprosy, known as kustha rog in Hindi, is attributed to a curse. A leper is considered the cursed one mainly because of the deformities it can cause.

Though it has been wiped out from most parts of the world, it continues to be a major health hazard in India. According to the World Health Organisation (WHO), India accounts for about one third of leprosy cases in the world. 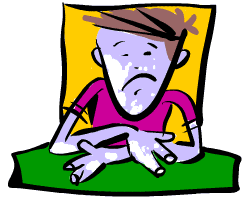 A highly infectious disease, it can be controlled with proper treatment within a few weeks. It is caused by the Mycobacterium Laprae, which is usually transmitted from other leprosy patients. All patients with active leprosy, especially cases of Lepromatous Leprosy and borderline cases, should be considered infectious.

Lepromatous Leprosy patients harbour millions of Mycobacterium Leprae bacilli in their nasal mucosa, which are discharged when they sneeze or blow their noses.

Age group
Quite prevalent among children, the rate of incidence rises to a peak between 10 to 20 years.

Immunity
It is a well known fact that only a few people exposed to the infection develop the disease. Some pregnant women develop lesions that heal spontaneously and help them acquire immunity in the process.

Factors that could lead to infection

Symptoms
Leprosy mainly affects the peripheral nerves, and sometimes the skin, muscles, bones, eyes and the internal organs. A patient may have some or all of the following features.

An advanced case of leprosy can have deformities like:

Control
Medical experts now use a multidrug therapy to effectively control the disease. There is now considerable evidence that BCG vaccine can provide some protection against clinical leprosy. In view of the variable protective effects of the BCG vaccine, several alternative vaccine preparations are being developed against leprosy.

Multidrug therapy: The drugs used are Rifampicin, Dapsone, Clofazimine, Ethionamide and Protionamide. The duration of treatment should depend upon the symptoms of the disease.

The WHO has recommended that the multidrug therapy for leprosy should be administered for at least two years and continued till the smear disappears. Even after the patient’s tests do not show any presence of the leprosy bacilli, the patient should be kept under observation, ideally for a period of five years.