When your child says she has a stomach ache, she could be suffering from a variety of disorders like gastroenteritis, measles, colic and urinary tract infections. Sometimes, it need not be a stomach disorder per se. It could be any other infection that has begun affecting other parts of her body. She might even complain of a tummy ache when it is hurting somewhere else or she is feeling unwell and does not know how to describe it. 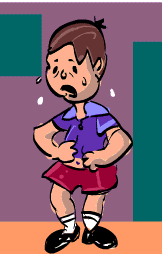 In the case of a stomach ache, one of the most important things that a doctor checks for is the point the child says is hurting. The closer it is to the navel, the more chances of the pain being psychosomatic in origin and could be cured with reassurances. The farther it is from the navel the more the chances of it being a disorder.

The best way to deal with it, however, would be to let a doctor decide the nature of the ache. For, stomach ache close to the navel is one of the major symptoms for appendicitis.