What does creativity in education mean? It not only implies an original approach towards tackling the same old lessons on the part of the teacher but also an attempt to foster and stimulate the natural inborn creativity that every child possesses and which often dies a slow death on exposure to the stultifying routine school generally means. 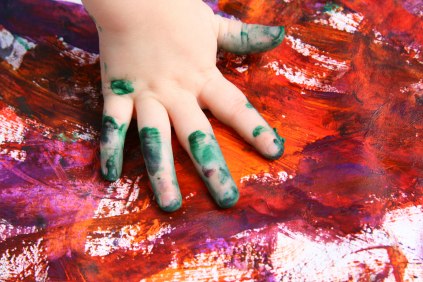 There is a marked difference between children in an environment in which they feel free to express themselves and where they are rigidly controlled. If you happen to observe a group of children at play, you will immediately notice how naturally and spontaneously their creativity is expressed.

In fact they display an extraordinary ability to improvise and will even create their own toys and playthings, often out of waste objects. Yet the same children, once they enter school and are compelled to conform to set patterns and modules, seem to lose that spontaneity and inventiveness and become reduced to mere learning machines, taking pride in reproducing perfectly what is fed to them by way of lessons.

What am I expected to do, the teacher might well ask? There is a set syllabus which has to be completed within a given time. Coping with large classes, the burden of the curriculum, the pressure to produce good results-how much room does that leave for creative teaching?

The truth is that if the approach to interpreting the curriculum for the students is creative, children will actually learn faster and retain better. It will be easier to hold their attention and even trouble-makers will be drawn to give their best.

It does require, however, a certain amount of patience, sustained interest and enthusiasm on the part of the teacher-educator, commitment to students and also the ability to put in hard work.

Creativity is encouraged not merely by introducing a few activity-based lessons but by first of all providing a suitable environment. And one of the biggest threats to the latent creativity of a child is fear of the teacher.

If she or he appears to be a stern figure of authority, waiting to penalise those who give the wrong answer, rather than a friendly guide who is going to lead one through the magic portals of learning and knowledge, all initiative will be suffocated.

So the first attempt should be to put the students at their ease and let them feel free to approach the teacher with their thoughts and ideas. The distance between teacher and taught should be reduced by displaying tolerance, understanding and sympathy.

And though the infamous martinet of yesteryears is disappearing from school classrooms, many children feel intimidated by a person who is in a position to control their actions so completely.

Freedom of expression is the second most important step towards nurturing creativity and this will automatically follow if the teacher does not adopt an authoritarian stance. When views which are contrary to established belief are expressed in class, the first impulse is to dismiss them.

However, every point of view should be considered objectively, sympathetically and without adverse comment. A non-judgemental approach on the part of the educator lets even the most timid child express herself or himself without fear.

At the same time if the school atmosphere encourages uniformity rather than originality of approach, creativity cannot thrive.

Creative education stands for the spirit of constant enquiry

Children should learn that there can be several answers to one question, not just one which is adjudged correct and is considered the last word.

If a divergent point of view is considered sensitively on its own merits, instead of being penalised with a reprimand or by having marks cut, original thinking will be encouraged.

Of course, there is no denying that there will be questions which permit only one correct answer but wherever there is room, attempts should be made to allow different trends of thought. Thus the formation of simplistic and rigid thought patterns will be avoided in a child.

Unfortunately, under the present school system, the method of learning is usually memory rather than cognition-based and the child who reproduces what is taught exactly, scores over the one who may have a more creative bent of mind but cannot learn by rote.

Creative teaching means a two way interchange rather than a one way communication. Children learn with instead of being taught at. They are motivated and encouraged through constant questioning and interaction to draw out the thoughts and ideas they may be hesitant to express.

This process can take the form of a brain storming session in which say, an essay topic is discussed from all angles and many different ideas are thrown up. Each idea should be thoroughly explored and perhaps something new and unusual will emerge. 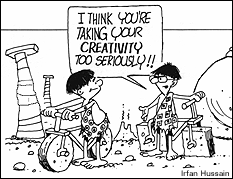 I think you are taking your creativity too seriously!!

There should be a constant attempt to go beyond the stock or the stereotyped point of view. Even ideas which appear wild and wacky should be considered seriously, instead of being laughed at because such a reaction is likely to discourage children from opening up.

Very often such ideas can be startlingly original. Children should be encouraged to see things from other perspectives and to try and connect seemingly disparate ideas to create a fresh point of view.

Problem-solving and the what if situation is one method which encourages innovative thinking. Questions like, ‘What’ll you do if your car breaks down while going to the station to catch a train?’ ‘What’ll you do if a monkey runs away with your bag?’ or ‘What if mothers went on strike?’ What if the sun did not rise?’ ‘What if fish began to fly’ can really stimulate students to use their imagination and display their resourcefulness.

‘What were you doing at the time?’ ‘What was your reaction?’ ‘How did you solve the problem?’ ‘How can you be better prepared to face such a situation?’ can be some of the questions posed to elicit a variety of answers.

Role playing is another way to make learning more creative besides being extremely enjoyable for a child. This could mean enacting the part of any object, animate or inanimate, figures from history or from a story if they are studying literature.

Actual enactment makes what is taught more vivid, makes for better retention and the pupils get the feeling of actually being involved in the lesson instead of being passive receptacles. It can even be used to teach concepts in science which younger children find difficult to grasp.

For example, drawing bird masks, wearing them and describing their habits aloud is not only a fun activity but aids in the retention process. Creative education stands for the spirit of constant enquiry.

Creative teaching also means communicating the fact that knowledge is always incomplete. While word games, creating new words with prefixes and suffixes, completing half sentences, incomplete stories stimulate thought, children should learn that each piece of information is just the gateway to another.

Homework which takes the form of finding out more about what is being taught in class, going beyond the requirements of the syllabus, will nurture the spirit of independent enquiry.

Thinking of new endings or interpretations of well known folk tales, for example as in the famous ‘fractured’ fairy tales can really stimulate the fledgling imagination and stress the importance of an individual point of view as opposed to going with the herd.

Not only will such exercises serve to create more confidence in the children, they will also allow scope for every child’s bent for fantasy to find expression.

A common (mis)-conception is that the ideal classroom is one in which there is pindrop silence and only the teacher’s voice is heard with the students responding one at a time in carefully modulated tones.

But for the committed educator perfect discipline should not be the only aim because the rigidly controlled child will not be able to expand the horizons of her or his mind freely. A little unruliness can be tolerated in the interest of better education, for opening up the vistas of the students’ minds.

And if the participation of the dullest as well as the naughtiest child is ensured it is a personal victory for the educator.

Because, what is a teacher but a guide, a mentor, an initiator into the golden realm of knowledge? And what can be more satisfying than helping young minds to discover their own potential?

Furthermore, the children who are fortunate enough to go through school guided by an educator who is always striving to stimulate them to reach beyond the visible horizon will carry these qualities with them through life. They will apply them in any field or occupation they enter into as adults and as a result the whole of society will benefit.

Such children will be leaders, innovators, thinkers and inventors and will possess the capacity to lead their country down the magic road of progress. Truly, there is no better gift a teacher can give to the students as the gift of creativity.

I would like to acknowledge ‘Education for Creativity’, edited by Sushma Gulati as one of the sources for this article.

This article has been reproduced with permission form ‘Chalk Talk’ ( a magazine for teachers and parents) Mar-Apr Issue. Deepa Agarwal is a freelance writer with several children’s book to her credit.