Five ‘o’ clock. Time for the baby to go out. But as Arti Jaiman placed the baby in the stroller, it began collapsing. She wedged her hand between the rods of the metal frame and lifted the baby out. 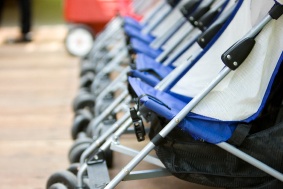 This was three months ago. Now Arti’s stroller does not fold anymore after it returned from the nearby bicycle mechanic’s shop. The mechanic decided the only way to fix it was to weld the joints.

The other day Pushpa Girimaji got hurt by her son’s toy gun. The gun had a vaccum rubber bullet which got stuck whereever it was fired. One day, she happened to be around during target practice and it hit her eye.

“I was scared I had gone blind,” she says. But, fortunately not much harm had been done.

Arti’s or Pushpa’s are not stray experiences. Accidents caused by baby products are quite common.

This is because most toys and other baby products in the Indian market are not made according to any safety standards. Sounds shocking?

But it is true. Although the Bureau of Indian Standards (BIS) lays out safety guidelines that every manufacturer is expected to follow, he is under no compulsion to do so. In other words, there is no authority that ensures that these products meet certain standards of safety before they hit the market.

As a result, the manufacturer has a field day. His products are often made of materials that can be harmful, such as recycled plastic, or if it is a soft toy, it is stuffed with rags instead of foam and is made of a cheap material that sheds fur.

Your child could inhale it and develop breathing problems, says Dr Anil Kanwar, a Delhi-based paediatrician.

And this is just the beginning of the list on what is wrong with Indian products. The toys’ eyes are stuck with glue that could have harmful chemicals in it and certainly not meant for a baby to nibble on. Sometimes the plastic eye may come loose and land in your baby’s throat, or nose, or eyes. 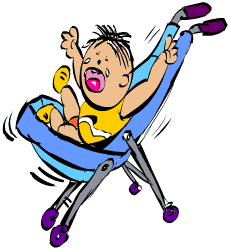 Is your Stroller Safe? [Illustration by Shinod AP]

So, are the manufacturers the only people to be blamed? Actually the problem is not so simple. “Our consumer laws are phrased in such a way that it is very easy to get around it,” says Girimaji, veteran journalist and columnist on consumer affairs.

Raj Kumar, the president of the Toy Association of India, endorses this fact. He says the toy maker or baby product maker is not obliged to adhere to the BIS guidelines unless he is exporting his wares. Very few Indian products reach the international market as they do not meet world standards of quality, he told Pitara.

And even the few companies who are exporting their products do not live life by the book. The law allows them to sell 20 percent of their wares in India. What they do is push the export rejects into the Indian market, says a toy shop owner who spoke on the condition of anonymity.

It is fascinating the way the toy maker earns his keep. They have to keep changing their company names and brand names to avoid being caught. For instance, a manufacturer makes a desi version of Barbie and calls it Karishma and supplies a few batches to some dealer. Then he shuts down shop and floats a new company with a new brand name and makes something else. But, surely there has to be some way to bring him to book?

“You can approach the consumer courts and ask for a replacement or make the manufacturer pay a compensation for damages incurred,” says Pushpa Girimaji.

But if you lodge a complaint about some product and expect the company to recall it from the market, you are not likely to succeed, she continues. The court can only issue an injunction on selling the product, it cannot effect a recall.

What needs to be done, according to Girimaji, is an initiative to ensure implementation of laws. Or, most manuacturers whose products land children in Dr Kanwar’s clinic will continue to go scot free.