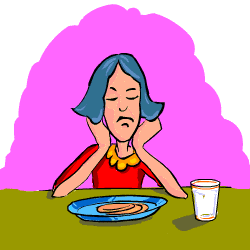 When it comes to food Shefali just can’t seem to be able to convince her seven year old daughter to eat regular meals. It seems to Shefali that she’d been trying literally to force-feed Tanya, from the day the child was born. But to no avail.

Tanya eats only what she absolutely feels like eating. And, that, to her anxious mother, is woefully little. The results show, too. Her daughter is painfully thin even at nine years of age, much more than she was as a baby. All bones and angles. Shefali wonders about the force-feeding: should she step up the treatment?

Why is Your Child Thin?

One reason why so many children eat poorly is because parents are very conscientious about trying to make them eat well. Most children, if pushed too hard, get disgusted by food with which they’ve had unpleasant experiences. Also, children’s appetites change, and do so very fast. So what your child liked eating yesterday may not be the same food that she’d enjoy today. Urging them to eat reduces the appetite of children greatly and even more permanently.

Many parents face the problem of having children who are reluctant or downright obstinate eaters. These parents are anxious that the child will develop some nutritional deficiency or lose resistance to ordinary infections. So they force the child to eat. The really interesting fact is that many parents whose children have eating problems have had eating problems themselves in their own childhood. Despite knowing that urging and forcing did not work at all for them, they behave with their children exactly in the same way that their parents once did with them.

What to do about It

But for parents who feel they have a real problem in their hands, they could try the following exercise. Place the food in front of your child and say nothing. After thirty minutes or so, take away the food without seeing how much or how little has been eaten. Don’t serve anything else until the next meal. When your child is hungry, she will eat. So try not to fuss about her eating habits. Instead just wait and watch.

Another way to build her appetite is to offer the child the foods she wants best, first. Make her mouth water when she comes to meals so that she can hardly wait to begin. The first step in building up that attitude is to serve for two or more months the sort of food she likes best, offering as balanced a diet as possible. And not to include foods she dislikes.

In fact, one way to strike a balance about your child’s fussy eating habits is to not to show that you care one way or the other about what she eats. Some children use the dining table to check the limits of parental endurance. It helps in such cases, to play cool, instead of getting all worked up about their refusal to eat. When they see that this behaviour has no effect on the parent, they often end the playacting. It also helps if you serve small portions.

And now, for the most important question. Why are some children so thin? The reasons could be several – heredity, too much parental urging, malnutrition and others. If a child abruptly or slowly loses a lot of weight, it is time to start worrying seriously. She must have a careful check-up. The most common causes of weight loss are diabetes, tension and peer pressure, especially in adolescent girls.

It is important for a thin child to have regular medical checkups. It is especially important if the child acts tired or has lost weight or failed to gain a reasonable amount. Try to ascertain the reasons why she is so thin. It could be emotional troubles rather than physical causes. So try and undo it.

Eating between meals could be helpful for some thin children. While their stomachs never seem to want to take much at one go, they are quite willing to eat often. Of course, it doesn’t help to encourage constant snacking. Children who do that develop poor eating habits. One nutritious snack after breakfast and lunch, then one at bedtime would suffice.

In fact a healthy child may remain thin despite a large appetite and that is probably the reason he or she was meant to be in the first place. Relax. Look at it this way. She may never have to worry about putting on ungainly weight when she grows up.