Rini had an arranged marriage just two months ago. Even before she could get to know her husband, she realised she was pregnant. And everyone she met had a little bit of advice for her. One of her friends told her intercourse could cause abortion in early pregnancy. So, every time her husband came close to her, she became cold. Finally, she spoke about it to her doctor. 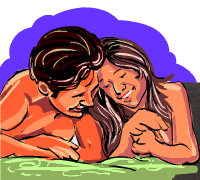 Rini’s is obviously a case of misinformation. There is no problem with sex during pregnancy. While both husband and wife should be gentle with each other to develop a deeper bond, there is no reason to believe that their pattern of life has to change. For most women, certain parts of their bodies such as breasts, nipples and the genital area become more sensitive during pregnancy and the sexual organs can be easily aroused.

In fact, a lot of women enjoy sex more during pregnancy. All you have to do is be a little careful about certain positions that increase pressure on the lower abdomen. You should also be careful after the seventh month to avoid stimulating uterine contractions, which may lead to premature labour. If you have a past history of abortion or vaginal bleeding, you should consult your doctor about sex during pregnancy.

It’s a myth that sexual intercourse could cause an abortion. Most abortions are caused by a defect in the egg or sperm or in the womb. Sometimes abortions can occur due to an incompetent cervical opening (mouth of the uterus may be open) or due to excessive exertion.

5 comments on “Is it safe to have sex during pregnancy?”