The couple married three years ago and a year later, Sunil, a management consultant, started travelling every week. Come Monday morning and he’s up at four to catch the six a.m. flight. He doesn’t return until late Thursday night. Sunday evening means the Monday morning taxi is only a few hours away. 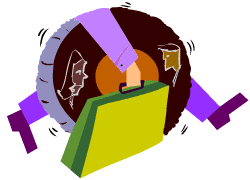 “We don’t want to take any phone calls,” said Meeta, a supervisor for an insurance company. “It’s our last night together.” Sunday nights are the worst, said Rahul her husband.

The pair tries to cram a week’s worth of life into a weekend, including car repairs, financial affairs, family visits and packing for the next trip. Meeta turns down travel opportunities at her company to protect their limited time together.

Instead of normal vacations, they grab an extra day or two here or there to spend more quality time with each other.

In an age of dual-career families and global commerce, professionals often spend more time with their laptop computers than their spouses. Constant travel is a source of stress for the both partners.

Long distance marriages are especially hard on working women with children. Take the example of Vaishali whose husband is posted in south India while she lives with her children in New Delhi and works for a private firm.

“I have to take care of everything from electricity bills, children’s fees and a landlord who is ready to pick up a fight at the drop of a hat,” she says ruefully.

Bogged down in mundane practicalities which are at the same time important, Vaishali is unable to spend time with her children and take them for outings. “Not only that, I am even going to celebrate my anniversary alone this year,” she says with an ironic look.

While some couples have found ways to survive a long-distance marriage, for many the stress eventually takes its toll. “You can only keep it up for so long before the bubble bursts,” says Vishal, a marketing executive with a multinational bank.

Once that breaking point is reached something has to go – the relationship or the job. Vishal himself left a promising job with a big multinational firm because it entailed a great deal of touring and had started affecting his married life.

Interestingly, corporate firms are now realising that the pressure of constant travel plays itself out not just at home, but also at work, manifesting in reduced productivity, burn-outs, stress-related illness, and absenteeism.

It stands to reason that if people are unsettled in their home orbits that disgruntlrement carries over to the professional arena as well; there are not many who succeed in creating an iron curtain between their personal and professional lives. So says Varun Sarna, a consultant based in Bangalore with more than 10 years experience in advising corporate firms on issues of human resource development.

The private sector in India seems to be coming around to this point of view as well. “Everything that a company can do to help a person smooth out the rough edges of their personal life pays off enormously in terms of increased productivity,” says Sarna.

Thus conferences and conventions become occasions for the family to convert it into a vacation, with companies paying for childcare.

The trend of young professionals in Indian metros turning down a promotion that would require increased travel or relocation, is increasingly becoming visible in India’s metropolitan cities.

With dual-income families, it still remains possible to have a reasonable standard of living and perhaps a better quality of life.

Ultimately it boils down to circumstances, choices and the degree of understanding between the couple regarding these crucial decisions. Which is why some couples remain in a “commuter” marriage all their lives while others make the switch in the nick of the time.