Shoma is a computer professional and is doing very well in her career. She spends a lot of time in the office crouched in front of her terminal. Recently, she has developed lower backache that is bothering her a lot. 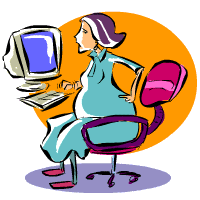 Backache is a common problem during pregnancy. It is caused by certain pregnancy hormones which soften the ligaments supporting the lower back bone and pelvic bone. The increasing load of the uterus further adds to the problem as it makes you arch further.

As the baby grows in the last weeks of pregnancy and his head enters the pelvis, the pressure on the pelvic nerves can cause backache.
Backache is usually the result of bad posture.

Too much of weight can also cause backache. If you have had a back problem earlier such as a slipped disc, you should take special care in pregnancy.