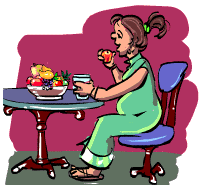 The Period of Pregnancy [(Excerpts from You and Your Child]

The normal period of pregnancy is 280 days (40 weeks) from the first day of the last menstrual period. Throughout pregnancy, the growing fetus is entirely dependent on its mother. The mother’s diet, her general state of health and the amount of physical work she does — all have their effect on the child. Therefore, proper antenatal care throughout pregnancy is essential.

The amniotic sac is a bag of fluid that encloses the fetus and protects it from injury. The growth of the baby during pregnancy causes the uterus to expand. By 20 weeks, the uterus is at the level of the mother’s navel, by 28 weeks, it is four finger-breadths above the navel, and by 36 weeks, it fills the whole of the abdomen.

By 12 weeks, most of the major organs — liver, kidneys, intestines, and lungs-as well as the limbs are formed, even though at this time the fetus is only 9 cm long and weighs only 14 g.

By 20 weeks, foetal movements are felt when the baby moves in the amniotic fluid and the baby’s heartbeat can be detected with the stethoscope. By 32 weeks, the baby adopts a head down position in the uterus and gradually the head settles down in the pelvis. Sometimes, this does not happen, and the buttocks are in the pelvis (breech) or the baby may be lying across the uterus.

The first three months of pregnancy are important because, as mentioned earlier, during this period the baby’s organs — brain, heart, kidneys, eyes, ears — and limbs are being formed. Avoid any medication during this period. Some medicines can be harmful for the growing baby inside you and so no medicine should be taken without the advice of your doctor.

The intake of certain drugs towards the end of pregnancy, may make the baby drowsy or unwell for some time after birth. During breast feeding, drugs may pass into the milk. Some may have no effect on the baby but others may be harmful. Similarly, all X-ray exposures should be avoided during the first few months. Some infections, particularly German measles (rubella), during the first three months of pregnancy, may result in the abnormality of some organs and lead to heart defects, congenital cataract or mental retardation in the baby. After the first three months, the risk of damage is much less.

If there is bleeding from the vagina or pain in the lower abdomen, consult your doctor immediately and take complete rest till you are able to do so.